1770 is located over 3 floors in a period “cottage” just on the edge of Brighton’s lanes, moments from the sea. We have been open since 2005, which makes us one of the longest running tattoo shops in Brighton. For the first 11 years we were the “sister” shop to the famed Into You in Clerkenwell, London that ran from 1993-2016. We fancied a change and have been called 1770 since 2016. Our family of artists have all been tattooing for quite a few years now, and between us we have around 100 years combined experience! Many of us have traveled extensively and worked all around the globe and we are happy to have settled here in beautiful Brighton, one of the most liberal cities in the U.K. Our tattoo experience is second to none, and we pride ourselves on the best possible hygiene standards, even more important in this post Covid world!

Our shop is a great place to visit, filled with natural light and stacked with interesting artworks made by us and some of our extended tattoo family. As artists we all have differing approaches and styles, but we see tattooing as a collaboration between artist and client and our aim is to make a tattoo that YOU are happy to wear for the rest of your life. We specialise in custom tattooing, and work mainly by appointment, however feel free to call, email or drop by and we’ll try and fit you in. Times have changed since many of us started tattooing, but we don’t follow the crowd and are considered some of the very best on the south coast. And yes, we do have vegan inks! See you soon. 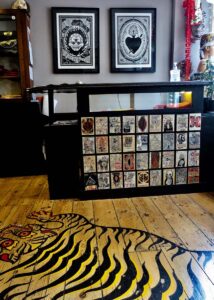 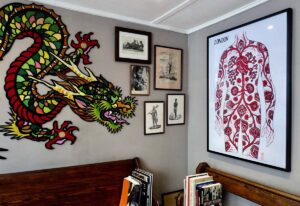 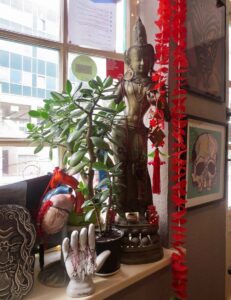 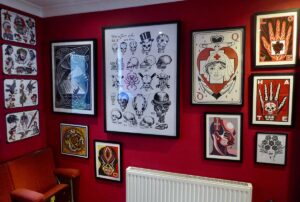 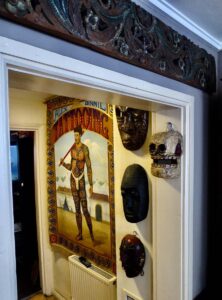 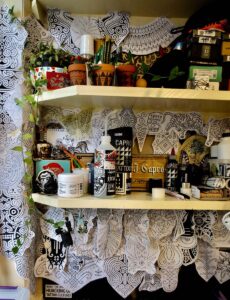 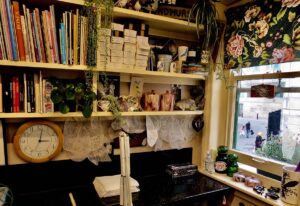 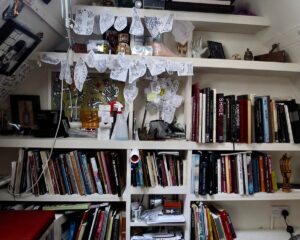 A brief history of Into You →

“Tattooing is not a job, and Into You is not a business”
Into You Tattoo was started in October 1993 by myself – Alex Binnie and piercer Teena Marie. I had known Teena a few years by this time, by the late 80’s we had both begun plying our trades from squats in London, Teena in Hackney, me in Bloomsbury, just down from the British Museum. We had both been pierced and tattooed by the legendary Mr Sebastian and it was he who brought us together. This was a time when the tattoo/piercing/body art scene was in it’s infancy. Around 1990 I started working in a small private studio in Clerkenwell – Clerkenwell workshops, just around the corner from where the shop was located for 23 years – 144 St John st. After just a year or so I moved to Los Angeles and tattooed out of the Gauntlet piercing shop, run by my then wife Elayne Angel. At this time Teena took over the small space in Clerkenwell workshops and pierced from there, she called it “Into You”.

Teena and I kept in touch and after a while I tired of L.A. and knew that London was ready for its first proper custom tattoo and piercing shop, so Teena looked around and was the one to find 144 St John St. I moved back and Into You proper was born. Initially we only had the ground floor and Teena pierced from behind a screen in the main room, myself in the opposite corner. It was pretty basic, but it worked! After a very short time I asked Curly (who I had known and hung out with in the early Dunstable years) to come and join us, he’d only made half a dozen tattoos from home at this point, but I believed!

And that, dear reader is really it… the rest being history! After only a year and a half or so I bought Teena out, things weren’t always that smooth between us. Soon after Miles apprenticed (one of the VERY few), Neil Ahurn came for a while, and then it snowballed – Duncan, Xed, Ian Flower, Jason Saga, Thomas Hooper, Steve Herring, Tomas Tomas, Tas, Nicole Lowe, Dan Gold, Mo Coppoletta…. and many more guests and friends. Lets not forget front of house, Zoe worked the desk and then learnt to tattoo, and of course Blue, how could we forget her!

It was great fun, lots of tattoo names came by – Henk, Horiyoshi, Filip, Freddy, plus British names like Lal (of course) George Bone, Dennis Cockell. We had our share of celebrities too – Britney, Kate Moss, Boy George, Alexander McQueen. More underground names came – members of the Prodigy, Chilli Peppers, Metallica. Not that it’s really about that, but why not name drop a little!

What it’s been about is trying to do something different, certainly at the time and in London there was nothing like us. We never saw tattooing as a JOB, but a vocation, a calling, a path. And the shop was more a life raft, a meeting place, a safe haven for people like us, we never saw it as just a business. Goodness knows how we kept it together for so long, it was pretty crazy at times, but we did and it was great and thanks to everyone who came and trusted us to tattoo them. It WAS amazing! We closed because the lease was up, simple as that. The building redeveloped the whole area changed, like so much of central London. Things have their time, and our time was up. We didn’t want to dilute it by attempting to replicate it somewhere else, it would never have been the same. So life moves on and we have scattered too, it was very special to us, and I know it’s been special to many who walked through our doors. Thank you all, it was beautiful.